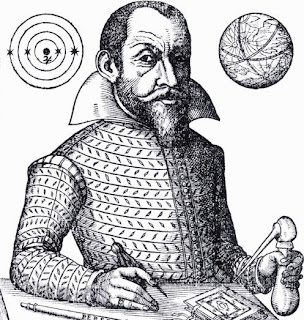 January 10, 1573 – December 26, 1624
Simon Marius was a German astronomer. In 1614 Marius published his work Mundus Iovialis describing the planet Jupiter and its moons. Here he claimed to have discovered the planet's four major moons some days before Galileo. This led to a dispute with Galileo, who showed that Marius provided only one observation as early as Galileo's, and it matched Galileo's diagram for the same date, as published in 1610.
It is considered possible that Marius discovered the moons independently, but at least some days later than Galileo; if so, he is the only person known to have observed the moons in the period before Galileo published his observations. Regardless of priority, the mythological names by which these satellites are known today (Io, Europa, Ganymede and Callisto) are those given them by Marius. The Moon crater Marius is named in his honor.
Simon Marius also observed the Andromeda "nebula", which had in fact already been known to Arab astronomers of the Middle Ages.
Posted by Lunar Mark at 12:01 AM